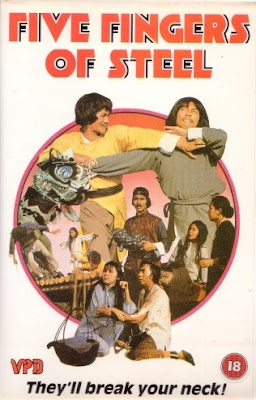 Plot: A grisly murder is being investigated by the local governor as Captain Yu (Yen Shi Kwan) arrives in town to woo his cousin at a family gathering, hosted by his Uncle and family patriarch Yu Hu (Lau Hok-Nin, in a greybeard 'disguise'). Yu Hu is one of those respectable, older martial artists with an extremely slow fuse: when rascals from the local 'One Kick School' barge in uninvited, he lets them trash the party with a drunken Dragon dance. Of course, the slowest fuse is often the most dangerous, and he administers some firm bashings to help his hot-headed nephews overcome the ne'er-do-wells.

Meanwhile, Mr Chan (Chan Lau, the snivelling lackey's snivelling lackey) toadies up to the governor to convince him to use Captain Yu to courier the town treasure, via his Ping-Ah escort company (no, not that sort of escort company). But wait! It's all a set-up to ambush Captain Yu, masterminded by the head of One Kick School and usurper to the governor's seat, Mr Choi (Kwan Young Moon). As Captain Yu is defeated in shame, his beloved is taken (and gruesomely ) by Mr Choi and he is imprisoned. After a prison break he falls in with hermit Wong Lung (Hwang Jang Lee), an old enemy of Mr Choi, and rescuer of Captain Yu's collegue Lung Chan (Yuen Miu) from the treasure ambush. A posse is raised and the two are hounded through the countryside, including an imaginitive torchlight arrest; but they escape back to Wong Lung. The grisly murder from the start is resolved, leading to an imaginative final showdown on an isolated wooden platform in the woods: Kwan Young Moon vs Hwang Jang Lee!!!!

Production: Nothing too lavish in terms of scenery or costumes, the usual dusty plateaus and forest paths play host to the fights. Music is a mix of Spaghetti with wah-funk and traditional Chinese for good measure. Some hilariously varied dubbing, ranging from Texas drawl to English West country (oo-ar!!). There's a particularly nasty subplot involving graphic rape and infanticide which I, personally, could really do without: Kwan Young Moon's "BWA-HAH-HAH!!" Todd Slaughter-esque villainy and Chan Lau's toadying is enough to tick all the bad-guy boxes and still be entertaining, really no need to sledgehammer the point home about how really really bad they are. Would have much preferred an extended training sequence instead...

And the film has one of those strange 'sudden endings' you get now and again: see also 'Shaolin Deadly Kicks', 'Sixty Second Assassin'.

Fights: The first barney at the wedding is fast hit-and-hope but filmed with an engaging energy. Patriarch Yu steams in with some tasty palm to show the cheeky upstarts from One Kick School, who, despite ther alma mater don't appear to be the best kickers. The Escort party has a great tumble with some hoodies. The prison escape sequence is good fun, making good use of the prisoner's shackles and including a tubby jailer being beaten in the belly repeatedly.

And, of course, the big one: Hwang Jang Lee vs. Kwan Young Moon. Two of Korea's greatest kickers face off for a revenge-fuelled blistering barrage of blazing boot! OUTRAGEOUS triple kicks, a leaping kick to the neck (!), a back kick to the head: the boys really let fly and of course this is Manna for the boot fan. Without spoiling too much, the other heroes Yu and Lung weigh in with a short sword and sai, and Kwan has a trick up sleeve (or rather near his socks...). In fact the only minor grumble is that I would have preferred the whole fight to be HJL vs. KWM, but overall the fight is excellent.

Training: HJL trains by kicking over trees. These are possibly from a sustainable forest, but that's not clear from the end credits...he also has a great array of coconuts in a wooden frame to kick and claw!

Overall: 4/5, excellent fights, some good-but-short training and only loses a mark for some lazy villainy. ESSENTIAL for boot fans.
Posted by Kevin Smith at 2:59 pm