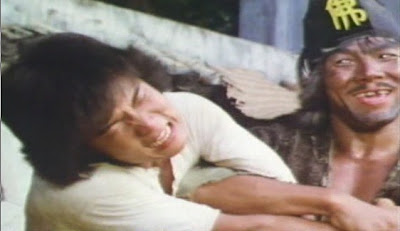 Plot: After a nice studio fight intro ("There was much conflict in the fighting world...") featuring Corey Yuen Kwai, bumbling dogsbody Hsiao Hai (Mang Hoi) is bullied at the local Shaolin Temple, forced into demeaning chores such as the dreaded 'pillar dusting duty'. A kind hearted oaf, he still manages to take care of his (suspiciously young looking) Ol' Dirty Uncle San Lu (Chin Yuet-Sang), who has a predilection for dog stew. Hsaio fortuitously saves a visiting prince (Hwang Jang Lee) from an assassination attempt, involving Hsaio's sister (nbeknownst to him). The Prince favours Hsaio, inviting him into his entourage whereby the strutting Hsiao takes full advantage and beats up his former bullies. The Prince's jealous head honchos Mo (Lung Fei) and Chow Erh (Hau Pak-Wai) frown upon this accident prone newcomer and plot his doom. Meanwhile Hsiao, after serving up the Prince's favourite lapdog to his ever-hungry uncle, discovers that the Ching dynasty-supporting prince is an exponent of the aggresive Lo Han style, a sworn enemy of his uncle's buddha fist. Uncle teaches Hsiao the buddhist fist, and when the Prince discovers that a style he swore to destroy still survives, the gloves are off: it's Lo Han vs Buddha Fist!

Style: Some half-decent temple and palace locations, plus the Prince's secret room where he practices the sleeping fist form is an hallucinogenic delight! Funky wah music mixed with pan-pipes.

Training: Two standout sequences; the Prince's sleeping fist form is superb: a sleeping HJL leaps from his bench and throws furious leg and hand shapes, roaring with laughter, and then throws himself back to sleep again!

Fights: A game of two halves- mostly comedy to start, Hsaio's return to beat up his former bully monks ends up in a full scale bundle (for those who grew up in 70's South London :). Later there's a tumble in the local gambling parlour including a stack of benches to pin the miscreants down. The assassination attempt itself is nothing special, but as soon as the training starts the whole movie shifts a gear. Immediately Lung Fei and Hau Pak-Wai are brought in to deliver a fierce duel attack with terrific co-ordinated spearwork and equally good tumbling blocks and counters from Mang Hoi. There's a gruesome ending to this fight involving a barrel, possibly inspired by Donkey Kong. 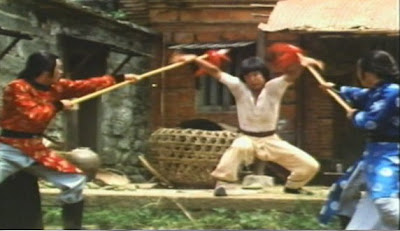 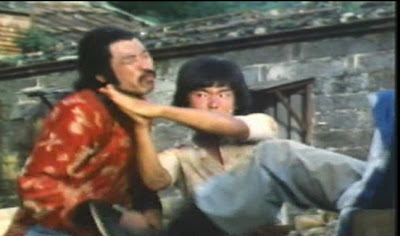 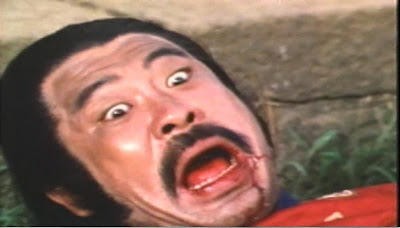 Hsiao has to use all the elements of Buddhist fist against the madness, fury and, er, sleeping of Lo Han; HJL has his work cut out and blags a Halberd to help his trademark boot. The tide starts to turn when Hsiao pulls off the Prince's ponytail and uses it as a weapon against him. A cracking end barney, reminded me of Chess Boxing's end battle with constant, clever shapes; tumbling and varied attacks.

Grammatical correctness of title: Yep, it's a real word: whereas 'Buddha Assassin' could be interpreted as as assassin from Buddha, 'assassinator' makes it explicit that it's Buddha as an assassin's target. Next week: should it be "Millionaires Express", "Millionaire's Express" or "Millionaires' Express"...?

Overall: 3.5 out of 5, really a game of two halves with an average comedy storyline and underuse of Lung Fei and Hau Pak-Wai to begin; but once the training sequences start though it really ups its game and is an excellent closing 30 minutes. A must for HJL fans, of course.
Posted by Kevin Smith at 3:25 pm