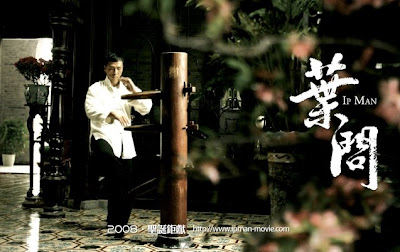 Plot: Wing Chun Master Ip Man (Donnie Yen) owns one of the many Kung Fu schools in the 'martial street' of the city of Foshan in the early 1930s. There is fierce competition among the schools to lay the claim to teaching the best style; this is evinced firstly by the (mildly rude) challenge from new-arrival Master to Master Ip whilst dining in his beautful family 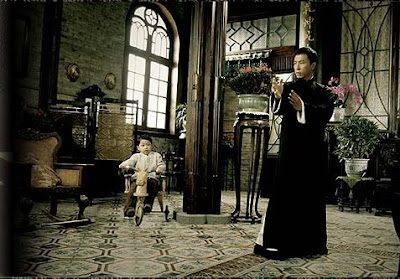 home, and secondly by the outright agression of a Northern gang led by ('Ricky' himself). The in-fighting is overshadowed by the threat of conflict with Japan, which finally leads to Japanese invasion in 1937 and the occupation of Foshan by the Japanese military. Foshan is ruined, the schools are closed, Master Ip's house is requisitioned by the Japanese as their HQ, and only Master Ip's friend and business partner Zhou Qing Quan (Simon Yam) maintains any reasonable trade with his cotton mill. Master IP is eventually reduced to coal mining to feed his wife (debutante Lynn Hung); when policeman-turned-collaborator Li Zhao (Gordon Yam) offers the miners a bag of rice if they fight at Japanese General Miura's barracks (newcomer Ikeuchi Hiroyuki).

Master Ip initially refuses, but after his brave friend Master Lin (Xing Yu) is badly beaten he volunteers and batters the best fighters in the dojo: General Miura excepted. When Miura sends first Captain Li Zhao and then 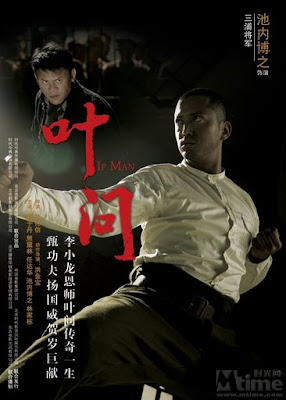 his weaselly second-in-command Colonel Sato to force Ip into further matches, Sato attempts to abduct Ip's wife, resulting in his severe beating. Forced into hiding, Ip Man is shocked to find that Jin Shan Zhao and his gang have returned to extort the cotton mill, and so he trains the workers in Wing Chun. Naturally there is a Showdown at the Cotton Mill (*ahem*) , but with no Chi Kuan-Chun around it's up to Ip Man to help the workers and chastise Jin Shan Zhao on his lack of patriotism. Finally Ip Man is tracked down by the Japanese forces and made to fight on a podium in his old house against the General, whilst a crowd of Foshan Chinese are forced to watch his expected humiliation...

Production: The general production is excellent, from the glorious furnishings of Ip Man's house through to bustling 'martial street' and the desolate barracks dojo. Colours are muted with very crisp cinematography and editing that does well by both the drama and the fight scenes. The story flows well, you won't be checking your watch when there are no fights on screen. Music is orchestral Chinese (if you follow me) and fits well.

Performances: Donnie Yen does quiet dignity surprisingly well, a world away from his 'cop on the edge' of Flash Point. Ip Man starts as being represented as a man of polite strength who can be pushed to a point and then react with just enough force to prove his point when necessary. Of course, we all know that when a master acts this way it won't be long before his full power is unleashed; the tipping point being when his wife is threatened (not surprising given the dark history of Japanese camps in Nanking) and to avenge the badly beaten Master Lin. Here Donnie is super-aggresive but we get some touching scenes when his wife tends to his wounds. 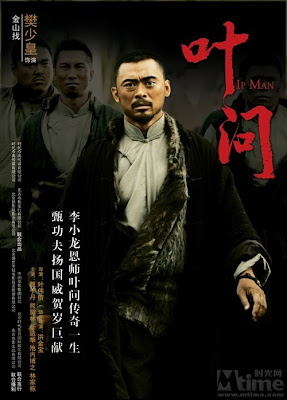 The supporting cast are not given a lot to do: Simon Yam has basically a cameo, and Gordon Lam does well as a policeman awash with guilt over his collaboration with the Japanese. All well and good. Special mention to Fan Siu-Wong for imbuing Jin Shan Zhao with pathos; it's clear his aggression is misguided and that he feels that he is a victim of circumstance, rather than working on using his considerable talents for the benefit of others. Ikeuchi Hiroyuki and Shibuya Tenma play 'Dashing-but-Sadistic-Occupying-General™' and 'Cowardly-Weasel-Dogsbody-Colonel™' by the numbers.

Themes: As with The Chinese Boxer and Fist of Fury to mention but two, this is a very basic representation of the Japanese occupation. The infighting between the rival Kung Fu practitioners highlights the fragmentation which enabled the smaller Japan to succesfully invade. However the ability to overcome a technologically superior aggressor is highlighted by Ip Man calmly disarming the pistol wielding policeman using his bare hands.

The Japanese are shown as simply evil nihilists; I'm not saying that's not accurate for that time and place, but I did enjoy the 'benevolent enemy' of Yasuaki Kurata in Fist of Legend, or the honourable Japanese opponent in Fearless who refuses to press an unfair advantage. Such a touch would have added a welcome extra dimension to the story. It is notable that before fighting all the fighters (except the furious Master Lin) pay respect to their enemy. 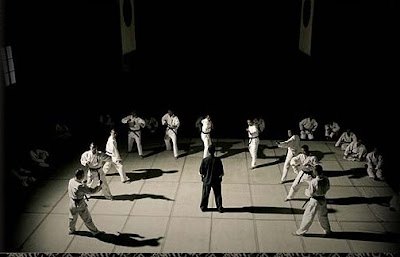 Ah, now we get to it. Absolutely top notch. With Sammo and Tony Leung (no, not tghat Tony Leung) at the helm we get masterful choreography and camera tracking. We start with a 'courtesy Kung Fu' challenge with Ip Man politely deflecting and firing minimal counters; but the fireworks really start when Jin Shan Zhao storms into town and goes through the Masters like a boot through butter - vicious foot and heel work. He gets short shrift from Ip Man, though, who angers Jin into using a sword, which Ip counters with a feather duster! Fast, crisp arm work throughout. We get some tasty polework at the Cotton Mill, but the fight highlights are in the barracks dojo. The soon-to-be-legendary '10 v 1' sequence is incredible, varied, and intense' a barrage of chain punches taking down the Karetaka one at a time. The final fight against the General is maybe over a bit quick 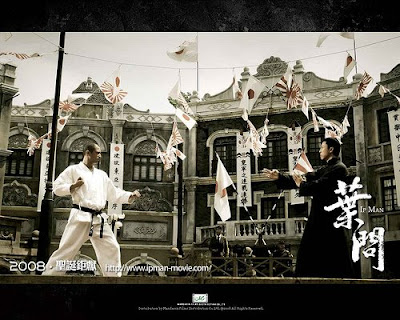 ly, but at least there's some concession to 'actually,Karate's not that bad, let's let him get a few strikes in'. Again a fury of armwork, working the General like a Wooden Dummy, wins the day. Terrific stuff, although there's some unneeded wire enhancement (punting prostrate opponents off the mat, for example).

Note there has been some controversy regarding exactly how 'Wing Chun' the combat was (dark talk of 'elbows not being in the centreline', 'dodgy footwork' and 'wrong knuckles') but it certainly didn't stop my enjoyment.

Training: Disappointing compared to Warriors Two and Wing Chun, here is clearly a chance to explain why Wing Chun is effective and counter Jin's insults that 'it's only for women'; but all we get are some Wooden Dummy montages. A real shame, hopefully this can be explored in the sequels.

Overall: 5/5, an action movie that blends incredible fighting and drama very well. Not many dimensions to the characters but don't let that bother you - enjoy!