Dance of the Drunk Mantis

aka 'Drunken Master 2' aka ''Dance of the Drunken Mantis'Director: Yuen Wo-Ping, 1979

A smörgåsbord of golden age kung fu from the master Yuen Wo-Ping.

Plot: Fight-era China. Trouble has been a-brewin' between the Northern and Southern variants of Drunken Boxing, as seen to great effect in Drunken Master. The Southern master Sam Seed (Yuen Wo-Ping's real-life dad, Simon Yuen) is leading a loafter life down in Canton, never far from the wine bottle and shirking his homely duties. The more vigorous Northern Master Rubber Legs (the Right Honourable Minister Of Boot, Hwang Jang Lee) has meanwhile blended his Drunken Boxing with Mantis Fist, resulting in Boxing Fist. Sorry, I mean 'Drunken Mantis'. Rubber Legs heads off South to Canton to challenge Sam Seed, with henchman Corey Yuen (fortune and later director of No Retreat, No Surrender). Meanwhile back at Seed Towers, Mrs Seed (Lynda Lin, returning from Drunken Master) fends off her husband's debt collectors and has adopted a son, Foggy, (Yuen Shun-Yi, who is of course Simon Yuen's actual son). Sam half-heartedly trains his son in Drunken Fist, but upsets him, and Foggy takes flight only to run into Sick Fist Master (veteran Yen Shi-Kwan) in his trick-coffin! Here he learns of three new styles: Sick Fist, Book Fist and Magic Fist to blend with Drunk Fist.

Rubber Legs lures Sam Seed to a tearoom at night for a 'courtesy kung fu' table fight - see clip above - where it becomes clear that the Drunken Mantis is too powerful. Sam flees; Mum and Foggy best the spear-wielding henchman, and the scene is set for a THREE vs one barney at Sick Fist's farm: Drunkens Mantis vs Drunk/Sick/Book/Magic Fist, plus a special new move at the end!

Fights:
The outstanding fight, and possibly the best example of its type, is the tearoom table-top face-off between Rubber Legs and Sam Seed. Lots of hilarious false starts as they test each others defences 'courteously', and terrific close-quarter acrobatics. Watch this one and compare with similar from Hero among Heroes and see which you prefer, tough call but this edges it for me. 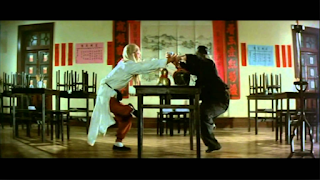 Henchman Corey Yuen has a decent halberd vs. sword fight with Mrs Seed, which blends straight into halberd vs. bare hands from Foggy. Corey and Foggy have a shorter comedy dust-up earlier before Foggy has mastered his new styles.

More comedy bundles earlier in Foggy's outdoor cafe, against his (unbeknownst to him) Dad, and moneybags Dean Shek who throws some interesting 'financial' shapes! 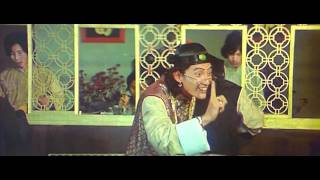 The end fight is relentless - some fantastic shapes from Hwang, and as expected some brutal boot, but with three good guys on site a longer fight with more 'team tag' and teaming up would have been welcome. Foggy blends all the styles well, and you get a helpful announcement of each before they strike.

The introduction of Sick Fist is hilarious - the very notion that a boxing style can be enriched by not feeling very well!

Training:
Pretty good as expected, given the Drunken Master heritage, but understandably not reaching the classic heights Jackie Chan  showed in Drunken Master or Yuen Wo-Ping's Snake in the Eagle's Shadow.

Cliché bingo: (1) Tearoom bundle with bullied waiter (2) marketplace ruck (3) moneybags the crooked banker (4) echo on introductory voiceover (5) Hwang Jang Lee laughing and then immediately looking cross....all present and correct. But - gasp! -The Plateau™ is not used here! Must have been busy - get your bookings in early, directors.

Overall: 4.5 out of 5,  a terrific addition to the Drunken Fist genre and more of a true sequel than the later official Drunken Master 2