90 minutes of Donnie Yen at his kinetic, lunatic best! 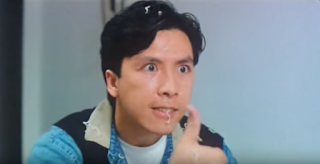 Plot:
Rogue Cop™ Dragon Yau (our Donnie), fresh from a roasting at the divorce lawyer Mandy (Rosamund Kwan)'s office, stumbles into an international money-laundering/drugs group as they exit the law firm with a suitcase of readies. In the resulting bundle the suitcase is lost, and the hunt to retrieve it basically involves Dragon, Mandy and potentially-dodgy associate David (David Wu Dai-Wai) trying to work out what the hell is going on whilst being chased by armed gangs through the streets of Hong Kong. This takes in bent coppers, bent lawyers, and even a bent iron bar at one point. After a brief drunken montage respite, we're all set for a scorching showdown involving launderer-in-chief Waise (Robin Shou), and, returning from in-name-only predecessor Tiger Cage, the mighty mafiosi Michael Woods and John Salvitti. We also get a welcome (but all to brief) cameo from Cynthia Khan, Donnie's boss again (see also In The Line of Duty 4)

Donnie is on top form here, in a constant state of hyperactive outrage whether hoofing henchmen off open-top buses, or seething his way through a meal with fellow fugitive Mandy. Dragon Yau is the polar opposite of Ip Man, but they'd have a great tear-up...

Fights:
Yes, they're undercranked in places, but so what. This is some of Yuen Woo Ping's  best modern day fight choreography, taking in stairwells, car parks, bridges, in-vehicle and middle of the road (not the musical style, rather Dragon and David scrapping in the middle of commuter traffic). Throughout Donnie is at his hyperkinetic, lunatic best, mixing precision back and sidekicks with John Wayne haymakers for good effect. An early highlight is the (sadly short) punch-up with David whilst handcuffed to Mandy (a nod towards Tiger Cage and Terry's beach fight).

But it's the FOUR-fold finale that takes the cake here. David confronts Waise in his office, and gets a brutal kenpo karate lesson, as Robin Shou showcases the terrific chops that would land him the Liu Kang role in Mortal Kombat (1995). Cynthia gets involved too, but we don't see enough of her trademark elbows and high kicks unfortunately. Then we move to the building sub-levels, and break out the katanas: 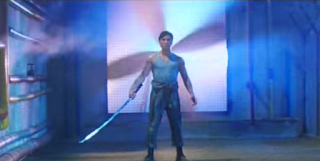 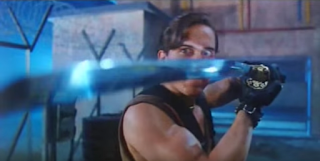 Real-life friends and sparring partners Donnie and John Savitti go at it hammer and tongs here,  atmospherically framed by a giant fan and chainlink fence. Next up Dragon must take on Mafiosa #2 (also a Donnie friend/sparring partner) Michael Woods, who brings a bag of muscular WWF-style trickery: flying elbows, body slams, beefy hoofs to the midriff; and lassos Dragon's arms with chain, making him rely on very fancy footwork. 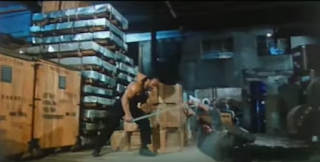 The final finale sees Dragon returning to the storeroom where Mandy and Dragon's ex-cop- partner are having a gunfight with Waise: there are guns in each hand, but no time for John Woo balletic slowdown here, it all tears on at a terrific pace. 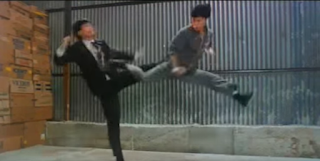 Overall
Probably my favourite modern day actioner, and the best example of 'angry Donnie'. A tiger-tastic 5/5. Grrreeeeeaaaattttt!!
Posted by Kevin Smith at 1:24 am