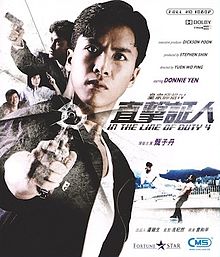 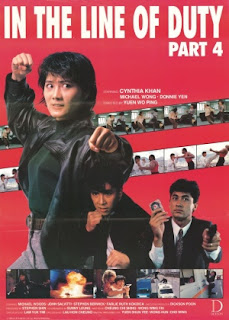 Plot: tough but humble stevedore Yuen (old-school mainstay Luk Wan-Ting) gets accidentally embroiled in a Seattle-Hong Kong drug ring, led by a dastardly CIA agent. 'Yes, Madam' herself, Inspector Rachel (Cynthia Khan) leads the investigation with loose cannon™ Donnie Yan (yes, that's his character name. Seriously. I mean, seriously.) as backup. Shady police captain Michael Wong is clearly up to no good as the action flights between Hong Kong and Seattle, with a brief comedy interlude involving Yuen's mum, we end up where all such 80's action should - in an office block with attached warehouse for the final reckoning.

Everyone plays their part well: Luk, the decent everyman pushed too far; Cynthia can play a tenacious inspector in her sleep; and Donnie is a blend of laid-back smoking casual and hair-trigger lunatic (see Tiger Cage 2).

Fights: the editing reel seems to have locked on 'overcrank', but what the heck - as expected for any Yuen Woo Ping 80's urban action this is breathtaking stuff. As in, you don't get to catch your breath for the first half of the film, so thick and fast are the tearups. Highlights include a superb pair of matchups as Donnie takes on real life friends/sparring partners John Savitti and Michael Woods: firstly, a stealthy nighttime cat-and-mouse, making great use of staired-streets and a prowling motorbike. Savitti does a hilarious wide-eyed-psychotic 'feinting' style, that needs an absolutely brutal finishing move from Donnie to defeat. 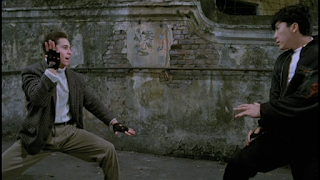 Next against Woods, a superb motorcycle fight (don't try this at home, kids) 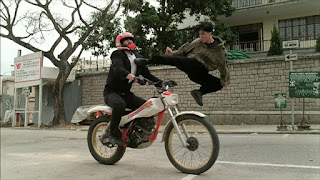 and then a rooftop bundle making use of Wood's mighty grappling and Donnie's brutal kicks. 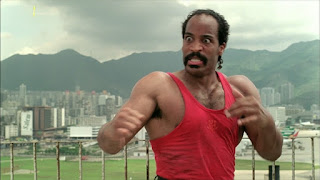 Cynthia has a cracking ruck with Fairlie Ruth Kordick, inside the office stairwell and lift shaft. As always Yuen Woo Ping makes inventive use of scenery and props throughout. The finale has our three heroes taking on Michael Wong and his creepy head of IT (at least I think he is) in the office while Yuen's kidnapped Mum dangles from a rope in the lift shaft: brutal boot is order of the day here!

Overall: 4.5/5, excellent action that just loses out by not having a single main character to follow (like Tiger Cage 2) so can seem a mess at points.